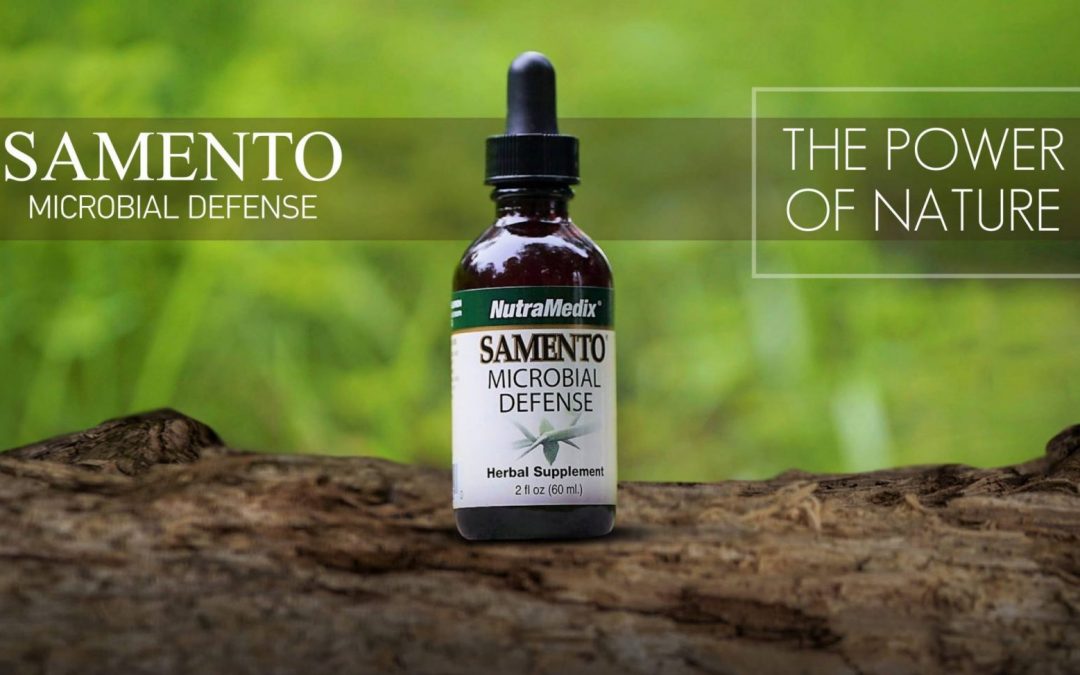 Let me introduce you to one of my favourite herbal extracts known as Samento. For the past 17 years I have prescribed Samento and treated a multitude of conditions with this product. Samento is a powerful medicinal herb that we can all benefit from.

Samento provides us with numerous medicinal benefits. The most prevalent benefits of Samento is that it is an anti-inflammatory[2], an anti-microbial[3] and an immune system modulator.
Its medicinal value doesn’t end here though, the use of Samento is literally limitless! Its other properties include antimutagenic[4], antioxidant[5], antiviral[6], anti-tumorous[7], cytostatic[8], depurative[9], hypotensive[10] , vermifuge or commonly known as anti-parasitic[11], anti-bacterial and anti-fungal.
Studies also show it to be beneficial in the treatment of a wide range of immune system related conditions which include:

One of my favourite uses of Samento is in the treatment of gastrointestinal disorders[12]. It is the first herb I prescribe to my patients suffering from inflammatory intestinal conditions, such as Crohn’s disease, Irritable Bowel Syndrome or Ulcerative Colitis. These health problems are chronic, often debilitating and uncomfortable. With the use of Samento, my patients are able to experience relief from these symptoms and any other related symptoms to such ailments. The root cause of gastrointestinal disorders usually stem from pathogens such as viruses, bacteria, parasites or fungi. What makes Samento such a wonderful product is that it is not only able to relieve symptoms from such ailments, but it also directly accesses the root cause of the problem and kills the pathogen(s) responsible for the symptoms.
In addition, this wonder herb can treat ailments including:

Samento is an anti-microbial medicinal herb, which means that it is also effective in the treatment of a wide range of infections including:

These are some of the major bacteria responsible for many issues we see in the digestive system, and which cause acute symptoms and leave long-term side effects. All of the above infections cause severe inflammation, discomfort, pain, bloating, fatigue, reduced appetite, headaches and migraines, pain in the upper trapezius area of the back and in severe cases, even depression. Samento has the ability to destroy the bacteria responsible for these symptoms and provides almost immediate relief.
Samento can also reduce the level of pain and inflammation in those suffering from arthritis, rheumatism and osteoarthritis. In the last 20 years of my work I have discovered that certain parasites dehydrate synovial fluids, which decrease the mobility of the joints and the joints immunity, leading to trauma, resulting in joint inflammation and consequent pain. Samento has the ability to destroy these parasites, reduce inflammation and relieve pain.
Overall, this medicinal herb helps to modulate the immune system by promoting the activity of our white blood cells, which help to protect the body from foreign invaders, such as bacteria and viruses. Samento works as a prevention measure by improving immunity and reducing the risk of circulating viruses and infections.
As well as prevention, it is used to treat:

When it comes to coughs and colds related to Streptococcus (bad bacteria), Samento is by far my favourite herb to prescribe to my patients in place of antibiotics, as it is able to decrease the strength of this harsh bacteria without harming your body’s good bacteria. Samento does this by reducing the inflammation of the throat area, unclogging and relieving clogged sinuses, eradicating runny noses and leaky eyes, abolishing headaches, and reducing and even eliminating fatigue.
So, before even thinking of taking antibiotics, which destroy healthy gut bacteria and B complex in the colon, use Samento instead, in conjunction with a strong, good quality, natural probiotic, such as Bio-Kult for the best results.

Samento has helped many of my patients with Diabetes 2. What I have come to realize after treating diabetic patients over the last 20years is that all these patients have the same reoccurring parasite in their pancreas, which cause a variety of dysfunctions, all of which are related to diabetic symptoms. After years of medication and no results, many diabetic patients become discouraged and want to give up, but do not fear, I have discovered that long term treatment with Samento, in conjunction with other medicinal herbs, not only reduces sugar levels, but also stabilizes insulin and glucose levels. In cases of diabetes, Samento activates the pancreas so that this organ can begin to function correctly and become healthy, once again.
As an anti-bacterial, Samento has helped many of my patients suffering from acute to chronic, ongoing cystitis and urinary tract infections. By using Samento every two hours for two days, Samento will eliminate the pain, inflammation, soreness and stinging as well as the frequent urination.  Patients should then continue to take Samento 3 times a day until all symptoms subside. With the help of Parsley drops, this combined treatment will detoxify your kidneys, urethra and bladder, and finally remove the root cause of such chronic situations. Do not continue to suffer, use Samento and Parsley today and become cured!
For those suffering from high cholesterol and high blood pressure. Look no further, Samento is the medicinal herb for you! Samento not only has the ability to fight cholesterol in the blood, but more importantly it destroys the visceral fat within the liver and circulating fat around the heart, as well as adipose fat (brown fat cells) in the colon. In terms of reducing high blood pressure, Samento works by helping to dilate the blood vessels and decrease the blood volume.
Samento is anti-parasitic which means it is able to kill worms and parasites in the body, such as rope-worms, which can live in the intestines for many years causing a continuous stream of unending problems.
Samento also has the ability to destroy amyloid fibrils, which helps with the onset of Alzheimer’s, Parkinson’s and tumour growths. However, this is a long-term programme combined with many other herbs and a good nutritional programme.

Samento is a natural, herbal product that is suitable for all ages.
To date, there are no known side-effects from taking Samento.
Samento is easy to use and it helps preserve, extend and restore our health. It really is a miracle plant!
In fact, the results of Samento show that this product is not only able to alleviate and treat physical health problems, but also improve mood levels.
Many of my patients found that after using Samento they stopped feeling and being depressed, were less stressed and became much happier. As Samento fights and removes all types of bacteria, it has the ability to dislodge embedded bacteria in the colon which suppress the release of Serotonin. Serotonin is one of our bodies neurochemicals responsible for our level of happiness. A variety of popular anti-depressants are called Serotonin-Specific Reuptake Inhibitors.
Therefore, it is logical to say that once the bacteria has been eradicated and dislodged from the colon, mental health problems, such as depression, begin to disappear along with the bad bacteria!
For more information on Samento and its research, click on the links below:
http://www.nutramedix.ec/ns/images/stories/pdf/samento_healthforeveryone.pdf
http://www.nutramedix.ec/ns/images/stories/SAMENTO-Selected_Published_Research.pdf
Further Research on Samento:
http://www.nutramedix.ec/ns/samento-library/224-get-armed-and-ready-for-flu-season
http://www.nutramedix.ec/ns/samento-library/217-samento-helps-in-some-depressions
http://www.nutramedix.ec/ns/samento-library/220-3-samento-case-studies-from-dr-maria-mirova
http://www.nutramedix.ec/ns/samento-library/213–the-healing-range-of-samento
http://www.nutramedix.ec/ns/samento-library/208-samento-normalizes-blood-pressure
http://www.nutramedix.ec/ns/samento-library/209-the-optimal-medicine-against-the-so-called-untreatable-diseases
http://www.nutramedix.ec/ns/samento-library/210-the-samento-phenomenon
If you are interested in trying Samento out for yourself, click on the link below:
http://sentosacy.com/product/samento-microbial-defense/
Samento is also available for purchase in our existing health centres:
1) Address: Georgiou Averof 23, Reberta Court, Limassol, Cyprus, 4107
2) Address: 96 Ayios Neophytos, Tremithousa, Paphos, Cyprus, 8270
[1] Autoimmune diseases – an autoimmune disease is a condition in which the immune system mistakenly attacks the body. The immune system is responsible for fighting against foreign invaders, such as bacteria and viruses. Normally, the immune system can distinguish the difference between foreign cells and your own cells. However, with an autoimmune disease, the immune system mistakes part of your body as foreign. It releases proteins called autoantibodies that attack healthy cells. Some autoimmune diseases only target one organ such as, Type 1 diabetes damages the pancreas, whereas other diseases, such as lupus, affect the whole body.
[2] Anti-inflammatory – refers to a treatment or the property of a substance designed to reduce inflammation and swelling
[3]Anti-microbial – responsible for killing all forms of harmful microbes commonly known as pathogens such as viruses, bacteria, parasites
[4] Antimutagenic –  antimutagens are the agents that interfere with the mutagenicity of a substance. The interference can be in the form of prevention of the transformation of a mutagenic compound into mutagen, inactivation, or otherwise the prevention of Mutagen-DNA reaction
[5] Antioxidant – responsible for releasing all forms of toxic substances in the body
[6] Antiviral – responsible for detecting, removing and protecting the body against viruses
[7] Anti-tumorous –designed to prevent or inhibit the formation or growth of a tumour
[8] Cytostatic – stop the multiplication of excess cells which produce cystic formations
[9] Depurative – responsible for purifying and detoxifying the body
[10] Hypotensive- an agent designed to lower blood pressure
[11] Vermifuge – usually an anthelmintic medicine designed to destroy and expel parasitic worms
[12] Gastrointestinal Disorders – refer to diseases involving the gastrointestinal tract, namely the oesophagus, stomach, small intestine, large intestine and rectum, and the accessory organs of digestion which include the liver, gallbladder and pancreas. It is a functional disorder that can affect any of the above organs.

This website uses cookies to improve your experience while you navigate through the website. Out of these cookies, the cookies that are categorized as necessary are stored on your browser as they are essential for the working of basic functionalities of the website. We also use third-party cookies that help us analyze and understand how you use this website. These cookies will be stored in your browser only with your consent. You also have the option to opt-out of these cookies. But opting out of some of these cookies may have an effect on your browsing experience.
Necessary Always Enabled
Necessary cookies are absolutely essential for the website to function properly. This category only includes cookies that ensures basic functionalities and security features of the website. These cookies do not store any personal information.
Non-necessary
Any cookies that may not be particularly necessary for the website to function and is used specifically to collect user personal data via analytics, ads, other embedded contents are termed as non-necessary cookies. It is mandatory to procure user consent prior to running these cookies on your website.
SAVE & ACCEPT